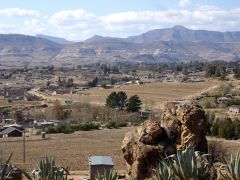 Pista HA5AO will operate from Lestho as 7P8AO from 15 October to 29 October. The primary purpose of the trip is to deliver humanitarian aid and support to  children. At his own expense Pista is supplying clothing, shoes and school supplies to the children. This will be his third visit to Lestho to work with the children.

Pista will be operating in his free time mainly CW, 80 – 6m. Logsearch and OQRS will be available on www.ha5ao.com  Please QSL to HA5AO.

Pista HA5AO arrived Maseru, Lesotho on the afternoon of Friday, 14 Oct with 4 suitcases weighing over 110 kg (242 lbs) of radio equipment and gifts for the orphanages where he is a volunteer.
He began setting up the station and antennas on Saturday and will finish on Sunday. The noise levels are S2-3 on the higher bands, but S5-6 on the low bands. He has an appointment on Monday with the Lesotho Communication Authority to pick up the license. He has written confirmation that a special callsign, 7P8EUDXF,  may be issued celebrating 30 years anniversary of "European DX Foundation" (EUDXF). At this time he does not plan to use 7P8AO, just depends on what is actually issued on Monday.

By now you may have seen Pista HA5AO operating as 7P8EUDXF on the DX Cluster network.
His Log is posted at:   ha5ao.com   Log Search / OQRS

There have been heavy storms for two days, it started Wednesday afternoon. He's never seen so many lightening strikes within one minute. Today (Thursday) the afternoon was not bad on 15m, his most productive band. A storm is moving in as he's writing this update on Thursday afternoon. The noise level still very high below 17m. There is now a backup generator in available, so power blackouts will be just a couple of seconds, as he does need to restart the station. He is now on the air 2-3 hours a day, next week he will be on the radio more often

7P8EUDXF went QRT at 15:21 UTC today. There are 4,027 Q in the log. OQRS and online logchek request active. LotW will be uploaded six month later.

Thank you for the support