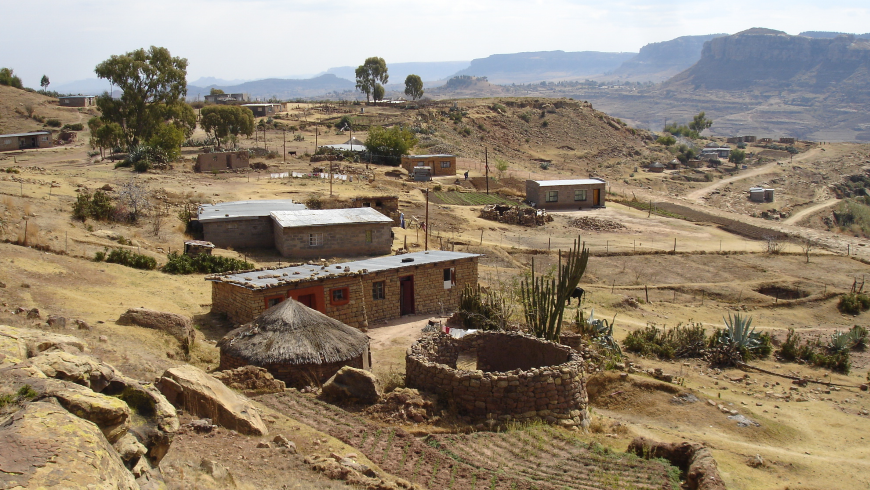 I will once again be back to the Kingdom of Lesotho, between 08 March and 22 March 2010. I will set up my station in the Trading Post Lodge, Roma  near Maseru.

I plan to working on the HF bands, throughout 80-10 meters, on CW,  SSB and RTTY. The station setup: ICOM 7000 transceiver with 300 W solid state PA, 10,2 m wire vertical antenna with SG-235 automatic antenna coupler. I should like to be on the air as much time as possible, however, please note, that this is a single operator mini expedition.

I will leave Budapest on 7 March to Frankfurt, than to Johannesbourg. I will arrive to Maseru airport in the afternoon on 8 March.  Hopefully I can set up the antenna and the station before the sunset. Logsearch will be available here in my website. QSL via HA5AO. See you in the bands

I arrived to Roma Valley, to the Trading Post Guest House around 4 pm. I was lucky enough to start to set up the vertical antenna with the help of the employees of the House before the sunset. However I could make the installation of the station complete, on Tuesday morning. After a rigorous testing of the hook-up, I switched on, and I was ready to start. All the bands were completely dead. I could not hear any station. The SG-235 antenna coupler did the job well, but nothing could be heard. With the help of HA7RY, Tomi, we tested the bands condition on 20, 15, 17, and 12 meters. Each band we could make successful contact. I was running with 250-300 watts, depending of the band. Now I was ready to send the first CQ on 15 meters. The first contact was with HA7UG, Laci, than shortly, several station were put into the log, i.e. 9M2, VK, ZL, and stations from EU. There were 30-40 stations in the log, when the well known of the smell of current and smoke was coming out of the power amplifier and the protection circuit switched of the PA. Oh, no! Please, no, no, no! I do not really understand what the hell of the function of this kind of protection. First burning off, than protect?  O.K. I looked into the PA, than I found two resistors burned and the soldering were a poor. I hoped that it was the source of the fault. After the fix I tested the PA, but sometime it was working, some time, do not. It can be overheated very quickly. May be the due to the high ambient temperature, which is 35-40 C. It was evening when I finished the fight with the PA. It is wasted time, and I was very disappointed. What else could I do, that continue to working with 100 Watts. Some further test with the help from home, with HA7RY, Tomi, then I started the CQ again on 20 meters, with 100 watts. Still in the afternoon I also set up an inverted L antenna for the 80, 40 30 meters bands which were working fine allow me to put into the log several stations from NA and SA.

The band conditions are generally very poor and the available 100 W makes my operation even more limited. Hopefully the propagation will improve, soon. The ionospheric noise level was very high, S5-S9, so no possible to work in the daytime.

I could not fix the power amplifier, so I am running with 100 watts only. During the daytime the bands are closed and the noise level is very high. Early in the morning 40 m is more or less o.k. Mainly the NA station can hear me. There is no chance to get over on 80 meter with 100 watts. The last two days I used the vertical for 40 and 30 meters also, as it seems that you can hear me better with this antenna. However the inverted L is slightly better for reception. Afternoon and late afternoon the 15 - 10 meters usually opened mainly to EU direction. However there are as well as some station in the log from NA and even SA.

The noise on the 20 and 17 meters bands are permanent. Yesterday afternoon and late evening there were very heavy t-storm. The weather is changed, the temperature dropped back significantly. I am optimistic regarding the 20/17 meters opening, as the noise level is much lower. I check those bands time by time, as well.

I made a dipole for 20 meter, feeded with a unique, do it yourself "Lesotho ladder line", hoping that the noise will be less. It was possible to tune the ant very well, but unfortunately it could not help to reduce the noise . Anyway, it was good fun, and the locals was laughing lots on what I am doing. Photos will be uploaded from home. There is no way to upload photos from here.

The log, for search and to the LotW, is uploaded. 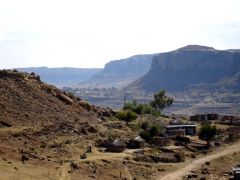 The Internet access is limited in Lesotho, so I can just inform you, that I went QRT on 22 March, 02:50 UTC. There are 4,097 QSO in the log from 94 DXCC entities. The log is uploaded to the LotW and for search into the database. I will upload the log to the eQSL system, as well, as soon as I get home. Thank you for the contacts and sorry for the low signal level.

I need to say many thanks to Jennifer Thorn and all the staff of the Trading Post Guest House, Roma, Lesotho.

I am deeply impressed by, and very gratefull for their kind care and for their attention with they made my staying very comfortable.

I could not read my emails in Lesotho. I will answer to everyone from home. However, I will not answer to the flag collector's request. They need understand, that the internet access and as well as my time is very limited, so I can not visit any collector's website. I am happy if I can upload the logs.

I will also inform you about the result of the donation campaign and as well as about the decision of the Committee of Leratong Community Centre made regarding this amount. 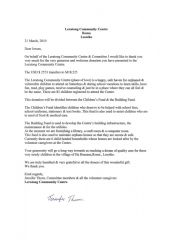 Please be informed, that I forwarded your donation of 2,573 USD to the Commitee of the Leratong Community Centre. Please read the confirmation letter and the Commitee decision on how this amount will be used for. Later, I was informed, that they also decided to use a certain part of this amount to have a new, stone house built to Tebello and Thato, as their old house was seriously damaged during the last winter and due to the heavy rains during the spring. It is dangereus and does not possible to repair.

The approval procedure of the new house project has been started during my stay, submitting the required documents to the Magistrate. As soon as they have the approval in hand, they will start to set up the new house, that must be finished before the winter. The life quality of these two orphan girls will be improved significantly. This is really much more, that I ever hoped. I will publish photos on the new house, as soon as it is ready and I receive it. Thank you again for all of you who sent donation helping the orphan children in the village of Ha Baseane, Roma, Lesotho.

Please check the on-line log prior to sending direct QSL request! If you do not find your QSO, contact me for clarification!

The latest news from Lesotho

I have just received photos on the new house was built for the two orphane girls, Tibello and Thato, with the help of the HAM radio operators and other helpful people who sent donation in the last year. The house has also been officially registered in the names of the girls as owners. You remember, I announced the donation campaign in August 2009 after my first visit to and my first operation from Lesotho. Last March I gave the donated 2,573 USD to the Commitee of Leratong Community Centre, Roma, Lesotho. The Commitee decided to have a new house built to the two orphane girls.

I am very pleased to inform you that thanks to your kind support, to the effort of managing the project by  the Commitee of Leratong Centre, to the donation of the beds, tables chairs, carpets, and curtains by the Sun Hotel in Maseru, the new house is finished and the girls moved in. This is the first time to Tibello and Thato  to have beds to sleep in, to live in a dry and protected place from the elements, to call home. Thank you, all of you who sent donation, for giving a chance to those two girls to have home. The Leratong Community Centre has sponsored their schoolbooks and will help them with the school work. You can read the Community Newsletter with the overview of their activity and development in 2010.