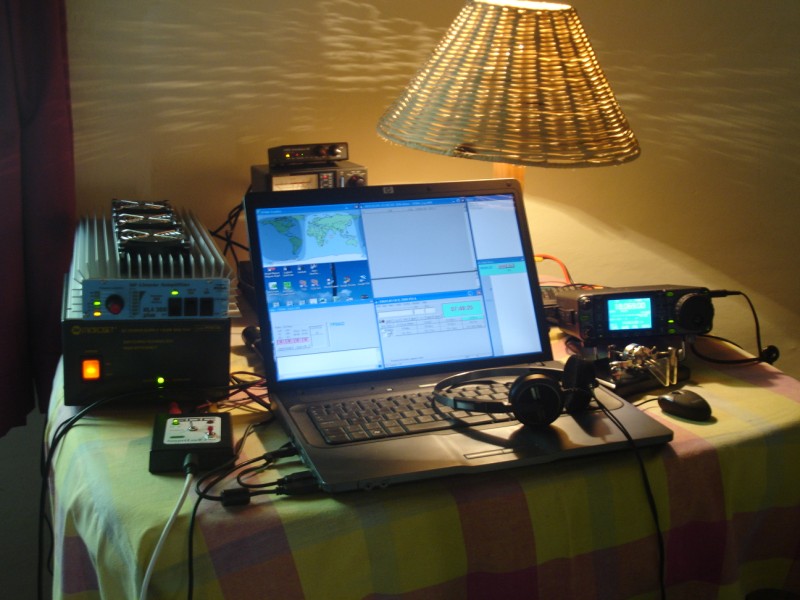 I arrived to Roma Valley, to the Trading Post Guest House around 4 pm. I was lucky enough to start to set up the vertical antenna with the help of the employees of the House before the sunset. However I could make the installation of the station complete, on Tuesday morning. After a rigorous testing of the hook-up, I switched on, and I was ready to start. All the bands were completely dead. I could not hear any station. The SG-235 antenna coupler did the job well, but nothing could be heard. With the help of HA7RY, Tomi, we tested the bands condition on 20, 15, 17, and 12 meters. Each band we could make successful contact. I was running with 250-300 watts, depending of the band. Now I was ready to send the first CQ on 15 meters. The first contact was with HA7UG, Laci, than shortly, several station were put into the log, i.e. 9M2, VK, ZL, and stations from EU. There were 30-40 stations in the log, when the well known of the smell of current and smoke was coming out of the power amplifier and the protection circuit switched of the PA. Oh, no! Please, no, no, no! I do not really understand what the hell of the function of this kind of protection. First burning off, than protect?  O.K. I looked into the PA, than I found two resistors burned and the soldering were a poor. I hoped that it was the source of the fault. After the fix I tested the PA, but sometime it was working, some time, do not. It can be overheated very quickly. May be the due to the high ambient temperature, which is 35-40 C. It was evening when I finished the fight with the PA. It is wasted time, and I was very disappointed. What else could I do, that continue to working with 100 Watts. Some further test with the help from home, with HA7RY, Tomi, then I started the CQ again on 20 meters, with 100 watts. Still in the afternoon I also set up an inverted L antenna for the 80, 40 30 meters bands which were working fine allow me to put into the log several stations from NA and SA.

The band conditions are generally very poor and the available 100 W makes my operation even more limited. Hopefully the propagation will improve, soon. The ionospheric noise level was very high, S5-S9, so no possible to work in the daytime.