We had two focuses on our announced January/February 2012 South Pacific DX Tour: T2 and T30 with possible operation from T33. We are regret to advice that we had to cancel the operation from T2 and T30. That was the bad news.
The good one is that our new target is C2, Nauru.

We have finished the antennas and station installation and started the operation on 12 01 at 00:50 UTC. Unfortunately the SteppIR BigIR motor gone during the transportation from the antenna bag. We set up an inverted L antenna for the second station, but it means strong limitation in the signal strenght. It is good for NA/SA but unlikly for EU. The two vertical doing the job well, especially on the higher bands. We tried the top band this morning, but the noise level was high, so we could log few station only.

The internet connection is very slow, so it is difficould to upload photos, however we will upload the log on reguler basis to the Clublog for search and to the LotW, as soon as we are able to send the copy of the license for the certificate file. Please be patient.

The first week went away of our 4 weeks activation of Nauru. The antennas in the sea need daily maintenance. The sea is very rough and destructive. The high tide is cc. 2 meters with 1-1.5 meter high very strong waves. We can do the maintenance during the low tide, at noon. The temperature is in the sun around is 40 Co or even more, so it is very hard to working 2-3 hours in the sun every day. The propagation was not really good in this week. The low bands, 160 and 80 meters are very noisy. The equatorial noise level is S5-S9. Not really possible to work on the low bands.

Yesterday there was a nice opening to EU on the 14 and 17 meters bands. This morning we could log cc 500 NA and SA stations on 10 meter. CT and EA stations have reported that they could hear our signals on 12 meter around 22-23 UTC, but they could not get trough in the massive NA pile-up. It is really amazing. This morning we could log some of them on 12 m. Big surprise. Top band: still very noisy. We could log only a couple of JA stations, KH2 and KL7 within one hour around the sunset. Difficoult to copy in the strong equatorial noise. This is the same on 80 meter. However we will check the band condition time by time.

I want to share my worst experience I ever had during my 40 years of ham radio operation.

This morning, between 20-21 UTC we were working with State side on 12 meters band. 1 kHz below of our QRG someone was also making QSOs in our pile-up using and identifying himself with our C21HA call sign. We know that there are police stations, we know that tuning on the DX QRG can happen, we know that sometime there is interference on the frequency.

There are pirate operations, time by time, using our C21HA callsign. We will report it here, as soon as we recognize or we get the information. Please check the on-line log. The Clublog is the only official on-line log for C21HA. We upload our log to Clublog every day, around 24z. If you are not in the log, work with us again.

Beyond the half of our operating time the QSO number exceeding the 16 kQSO. Unfortunately the Solar radiation storms resulting significantly increased proton flux and very high Ap index which does not help us. We have received comments from EU asking more attention to the 15, 12 and 10 meters bands. We check the band opening regulary, but these bands have been closed to EU. We continue to monitoring these bands on the proper time to EU. Thanks for the valuable propagation calculations, we received by emails helping us in this effort.

Last night on the 80 meter was less noisy making it possible to hear the stations from State side. However there was stormy weather which caused some minor damages on the antenna system in the time of 80 meter NA operation. We can do nothing during the night in the high tide, than to wait for the morning low tide. We could make some QSO with the damaged antenna on 40 meter early in the morning.

Yesterday morning (UTC) there was a nice, but very short opening to EU on 15 meters band. The band was open for 20 minutes only, but we could log several EU stations. The complete opening, from the very beginning was recorded, including the pile-up, by HA5PT, Tamas. You can hear this nice opening here in this link. Thank you Tamas, HA5PT for this valuable recording.
This morning around 20 UTC we could log some EU station first on 12 meter, than on 10 meters band. We were calling EU only several times, but IT9TJH is in the log on 10 meters band only. We will countinue to monitoring the higher bands.

On the 24th day of our operation we exceeded the 30 kQSO. There are 30302 QSO in the log. During the last 3-4 days we were able to work on the top band. The equatorial noise level went down to S2-S3, which is still high to hear the EU stations. The second station actually has not been running for days. The imrovised Inverted L antenna is not effective enough to get over with 100 W not even to State side at this low sunspot number periode. (As you know, the motor of our SteppIR BigIR antenna gone at the transportation.) The 95 percent of the QSOs were made on one station.

After 26 days of operation C21HA went QRT at 00:15 UTC 07 February. The "two back-packers single station show" is over from Nauru. There are 32392 QSOs in the log from 160 DXCC entities.  Detailed statistical information available on the log search page. The log has been uploaded to the LotW, as well. The OQRS service is now opened and available at the on-line logsearch page.

The QSL cards for the principal individual sponsors and the first huge batch of QSL cards for the request we received  by OQRS system, were posted yesterday. The QSL cards have also been sent to the sponsor DX Clubs to forward to their members. Now, our QSL manager continue to process the direct requests were received by post. We uploaded the log to the LotW from Nauru. By now, more than 45 % of the total QSOs were confirmed via LotW. We could submit our application for the Mix and CW DXCC Award via LotW only. There are 4 confirmation missing for the WAS Triple Play Award, 3 RTTY (DE, SD, VT) and 1 SSB (DE). We do hope to receive these confirmations, soon.

One month on an out of the way island that’s really way-out... 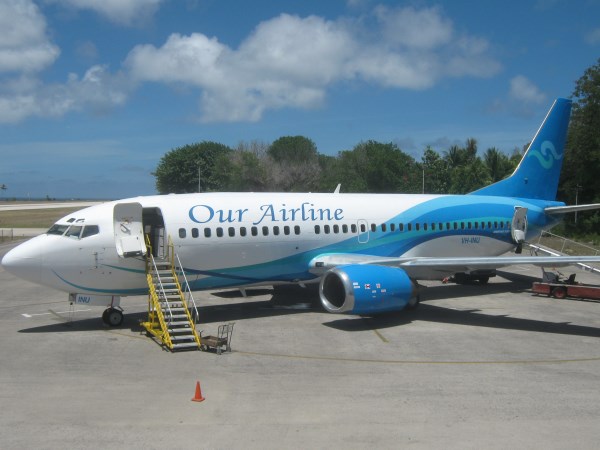 Early 2011 (after our successful YJ0HA-Vanuatu trip) we decided to strike the chords again and after some research voted for another Pacific tour in autumn with a target this time of Tuvalu, Banaba, West Kiribati and Fiji with primary focus on the first two. Lots of investigation led us to understand that landing at Banaba is not an ordinary issue—we would have to hold the landing permission of 'The Council of Elders' besides the allowance of Kiribati Government. This 'Council' (they live far from Banaba) was difficult to connect with so we ran out of time when finally they accepted our plan, so we had to postpone the trip to next January. Meanwhile we encountered some other troubles. The air flight between Fiji and Tarawa was temporarily suspended and the nationwide freshwater crisis on Tuvalu resulted in an extreme limitation on checked baggage and moved water to being a top priority cargo on the planes